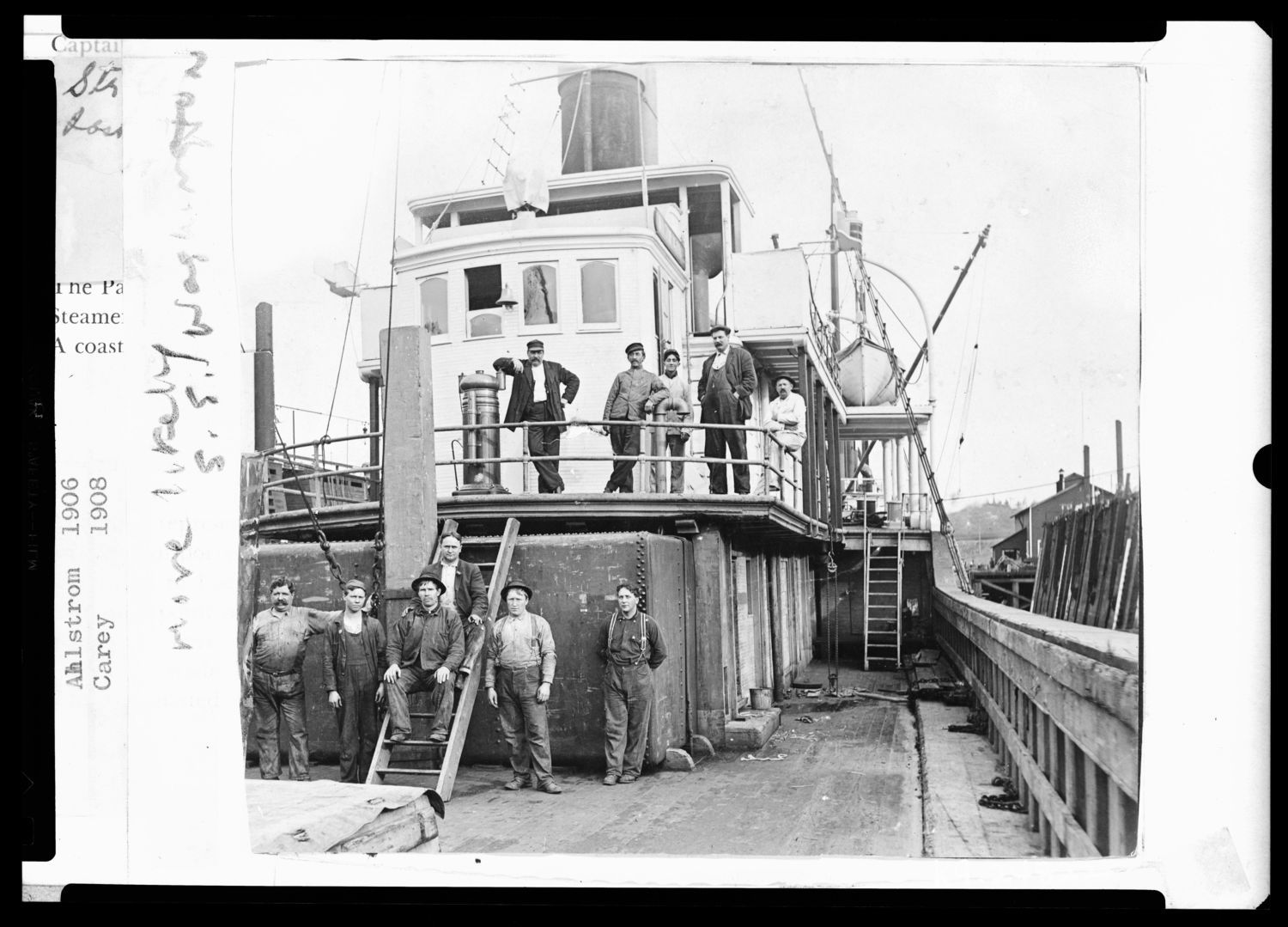 Select Item below to DOWNLOAD - Once item is selected, right click and choose 'save as'
17.3 MB, 6000x4316
2.6 MB, 6000x4316
196.3 KB, 1500x1079
60.0 KB, 750x539
14.8 KB, 200x143
7.4 KB, 135x97
4.3 KB, 100x71
2.7 KB, 75x53
HIDE ASSET
Copyright
ASSET METADATA
7624ad48-e0c6-4075-a30e-5aedadbfbf80
Washington (built 1906; steam schooner) crew posing informally on board while in port, undated
Additional information included inside the negative enclosure: "Career of the Washington Recalled[CR]The photo [different from the cataloged photo] reproduced above shows the little steam schooner, WASHINGTON, berthed at a San Francisco dock, when she was owned and operated by Olson and Mahony, of San Francisco, in the coastwise lumber trade. Of 539 tons, she was built at Seattle, in 1906. In 1911, Olson and Mahony bought her from the Washington Marine Co. of Seattle, her original owners, at a bargain price of only $30,000.[CR]The WASHINGTON figured in several mishaps. On November 12, 1911, as she was leaving the Columbia River and while on the bar, she broke down due to one of the deck lashings having caught in the propeller, after a sea had washed a portion of her deckload over the side. She drifted, her anchors not holding, and was steadily carried toward the north shore. For nearly 24 hours, her passengers and crew were in a perilous position until the tug, TATOOSH [(built 1900; tugboat)], finally came to her rescue and towed her to Astoria. She later came to Portland for repairs, and after reloading, proceeded to San Francisco. Olson and Mahony laid her up temporarily for additional work and then placed her on the San Francisco-Coos bay run, but on her maiden trip to Coos Bay, she got into more trouble and had to be towed back to the Golden Gate; later plying to Eureka. The vessel was said by mariners to have been too small to pay on long runs.[CR]In February, 1912, she again changed hands when she came under the management of W.S. Scammel and Co. of San Francisco, who operated her until 1918, when she was resold again to the Little River Redwood Co., a subsidiary of Hammond Lumber Co. of San Francisco. The WASHINGTON eventually met her end on Feb. 15, 1932, when she foundered on Humboldt Bay, California. The waterlogged hull was broken up for scrap. Photo courtesy A.O. Anderson, Washington, D.C. from the Joe Williamson collection, Winslow, Washington."
U. S. National Park Service
Permission must be secured from the individual copyright owners to reproduce any copyrighted materials contained within this website. Digital assets without any copyright restrictions are public domain.
Restrictions apply on use and/or reproduction:This image is for research and study purposes only. This work may be protected by U.S. copyright law (Title 17, U.S. Code), which governs reproduction, distribution, public display, and other uses of protected works. Uses may be allowed with permission from the copyright holder, or if the copyright on the work has expired, or if the use is "fair use" or within another exemption. The user of this work is responsible for compliance with the law.
Image
San Francisco Maritime National Historical Park, Code: SAFR